Considering that the price of carbon in Europe is about €90 per ton, 40-60% of emissions can be reduced economically

Experts explored such impacts in the short term and the effects of decarbonization on energy prices in the long term, reports CRU.

Higher energy prices are a precondition for decarbonization

There is a close relationship between wholesale prices for gas and electricity, because electricity from natural gas in most cases provides a market generation option. 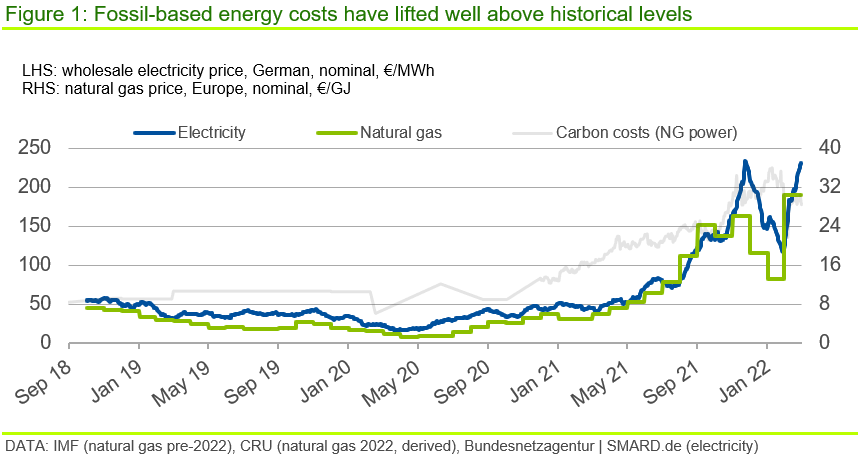 Wholesale electricity prices have risen from a long-term stable level of ~€50 MWh to well over €200, with higher carbon prices also contributing to some extent.

However, when grid balancing costs are included, batteries are also considered as proxies – baseload renewable costs rise to ~150 MWh. 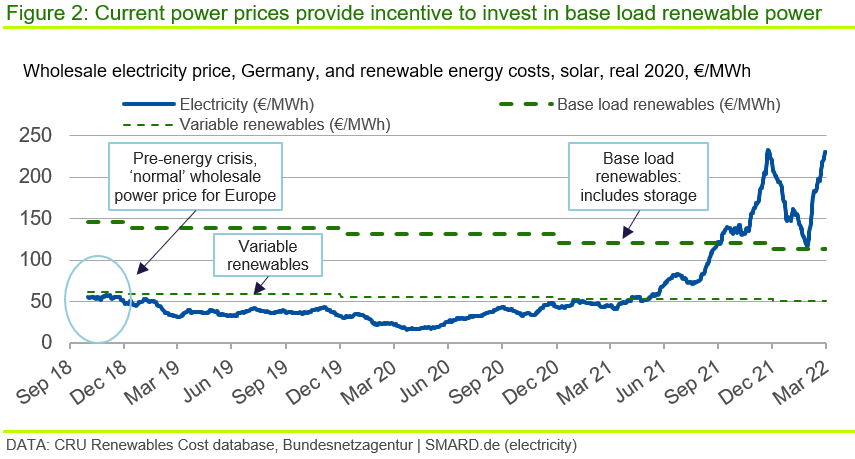 Currently, these additional costs are less related to battery storage costs and more to pay fossil fuel power plants to operate flexibly by reducing output when renewable output is high, and vice versa. This short term requirement has a real cost, usually carried over to the network fee rather than through the wholesale price.

“Since September 2021, we see electricity wholesale prices lifted above baseload renewable costs such that, today, baseload renewables are by far the cheaper option, which should provide incentive for accelerated investment," stated in the material.

RES will not provide cheap and big energy

The forecast for natural gas and carbon prices in Europe suggests that the cost of electricity based on natural gas will remain above the base cost of renewable energy in the long term.

After all, the costs of energy based on fossil fuels are becoming more expensive, in part due to the price of carbon associated with the EU's decarbonization ambitions. 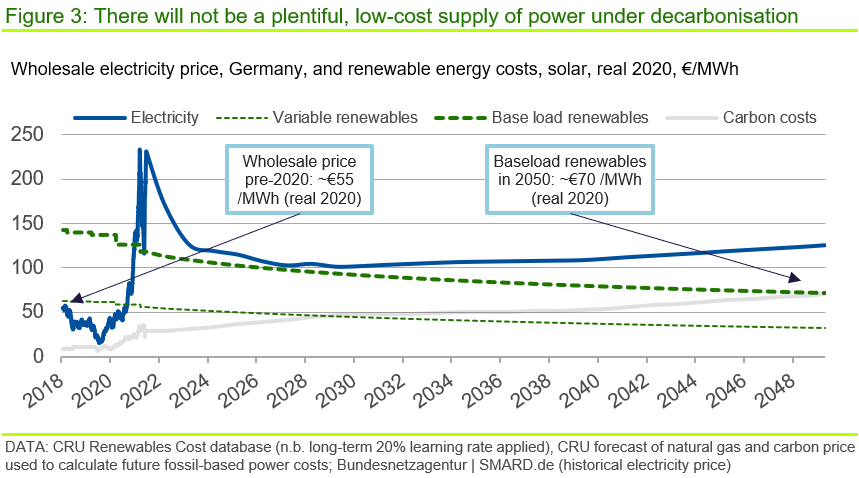 This long-term outlook suggests that there is now a much stronger economic stimulus, as well as an incentive for energy security, to accelerate investment in renewables, which is likely to be held back only by uncertainty over energy price forecasts, political blockages and the current supply chain capacity for accelerated construction of renewable energy infrastructure.

Even though CRU has developed a trajectory to aggressively reduce renewable energy costs until 2050 – based on a 20% learning rate (i.e. falling by 20% with each doubling of capacity) – this only leads to renewable energy base costs up to ~ €70 MW. h, which is higher than the stationary level of wholesale prices before the energy crisis ~50 MWh.

RES provide an obvious path to decarbonizing a large part of the economy, but they will not lead to a cheap and redundant supply of electricity compared to stable energy prices.

This has implications for the costs of producing goods, as the decarbonization of the sector will rely heavily on renewable energy either directly (electrification) or indirectly (green hydrogen).

The role of the carbon price is to raise the cost of fossil energy in such a way that – more expensive – non-fossil alternatives become economically viable. In this respect, the price of carbon has the same effect as high fossil fuel prices. 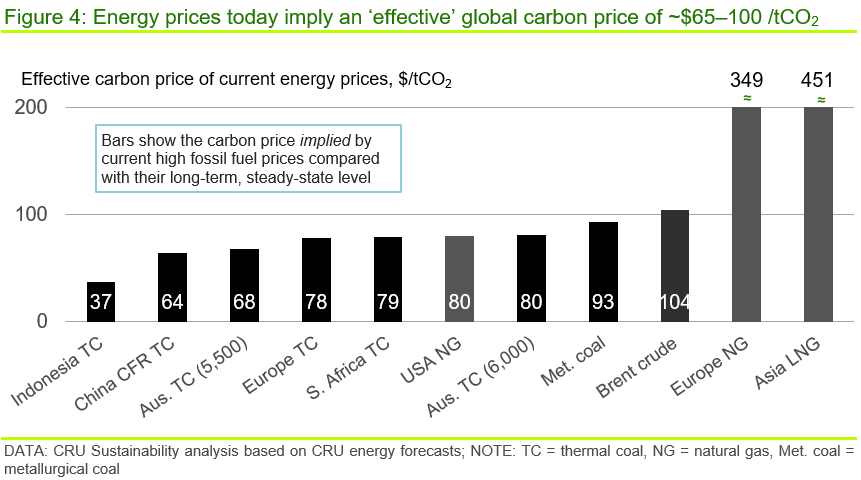 The chart shows the choice of fossil fuel energy sources around the world and compares current high spot prices to equivalent historical stable levels. The bars show the efficient price of carbon that would have to be applied to each energy source to raise its price from its stable historical level to its current spot price.

Most experts agree that a global carbon price will be the most effective tool to promote decarbonization. Today's energy prices provide an effective carbon price equivalent in the range of $65-100 per ton.

“That is, the position we are in today with regard to high energy prices generally (n.b. excluding the very high natural gas prices), is the exact position we need to be in at the global level – whether through high fossil fuel prices or the introduction of a carbon charge – to incentivise decarbonisation," noted in the material.

The emission reduction curve shows the price of carbon needed to stimulate certain shifts in low carbon technology processes in the European economy and is based on, among other factors, stable government energy prices.

This shows that for the entire economy, a carbon levy is needed to raise the cost of fossil fuel technologies and make low-carbon options economically viable. 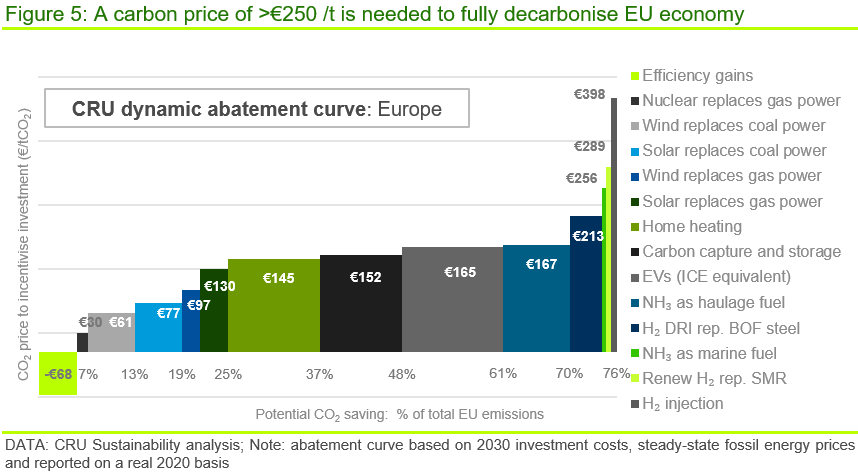 "If we feed current high energy prices into this curve, we can see that it drops significantly as higher energy prices do some of the work of a carbon price," - the message says. 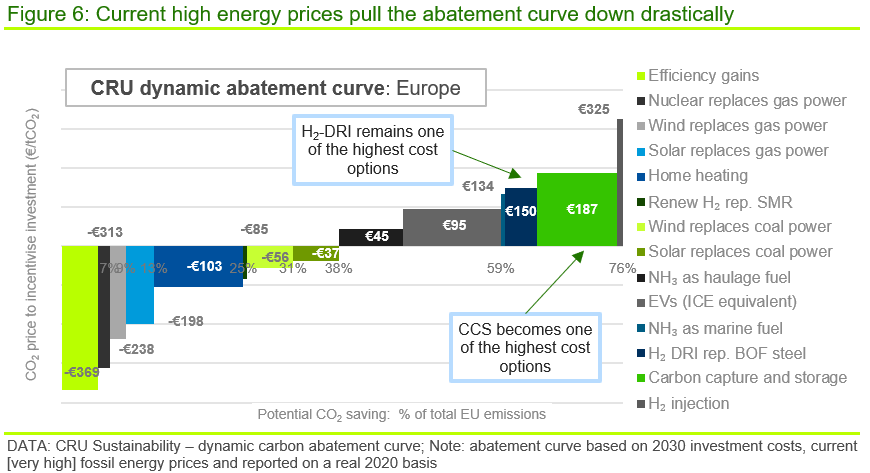 Many low-carbon technology transitions can now take place at negative carbon prices, as high energy prices do all the work, and more, to make low-carbon alternatives economically viable. Given that the price of carbon in Europe is currently ~€90/t, this means that 40-60% of emissions can be reduced economically.

Carbon capture and storage (CCS) is becoming one of the most expensive options because the business case for CCS does not benefit from high energy prices, i.e. CCS are additional costs on top of the main energy costs, while renewables, for example, are a substitute fossil fuel.

It also shows that even with current high energy prices, steel remains one of the most expensive sectors to cut.

In the UK, the independent Committee on Climate Change (CCC) found big failures in achieving the goals of the Net Zero strategy to move away from fossil fuels, energy security and reduce carbon emissions.