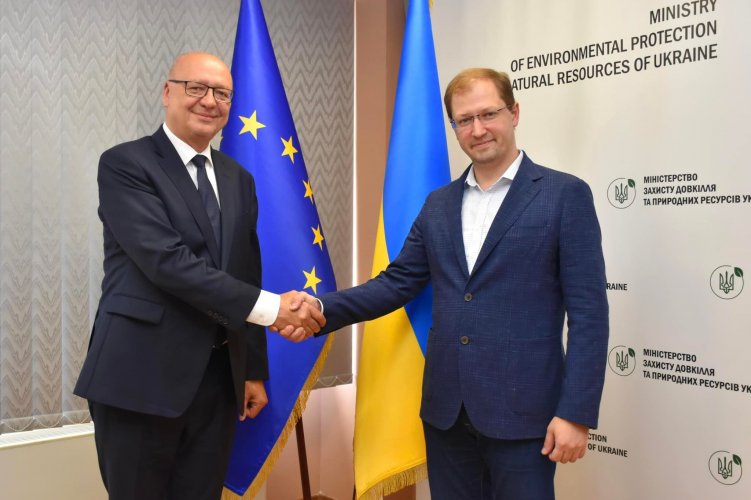 Since the beginning of the full-scale invasion, russian troops have destroyed the nature of Ukraine on an area equal to half of the territory of the Czech Republic

The Czech Republic will help Ukraine in the green post-war restoration of the environment, in particular, it will support natural parks, climate policy, reform of the waste management system, and the fight against industrial pollution.

This was agreed during the meeting by the head of the Ministry of Environment, Ruslan Strшlets, and the Czech ambassador to Ukraine, Radek Matula, Strшlets reported on Facebook.

He noted that during the 5 months of the war, the russians damaged with trenches and burned an area of ​​forests comparable to half of the territory of the Czech Republic. About 1 million hectares of Ukrainian protected areas are under threat of destruction.

"After the war, all this must be demined and restored. And here, the support of the Czech Republic, which has valuable experience in demining territories, is very important for us," said Strilets.

Matula paid considerable attention to the post-war restoration of Ukraine's valuable natural territories and offered to take patronage over one of Ukraine's natural parks.

Politicians also discussed the progress of the Ministry of Environment in the field of waste management reform.

Strilets noted that Ukraine hopes to establish practical cooperation with the Czech Republic in this direction.

He also added that Ukraine was invited to participate in sectoral conferences in the Czech Republic in September. This will allow the experts of the Ministry of Environment to present to the international community important cases of Ukraine in climate policy, sustainable subsoil use and prevention of industrial pollution.

"We appreciate the Czech Republic's attention to all European integration initiatives of Ukraine and thank you for the fact that the restoration of Ukraine is one of the 5 main priorities of the Czech Presidency of the Council of the EU. We count on further support," added Strilets.

As reported EcoPolitic before, the head of the Ministry of Environment Ruslan Strilets and the Minister of the Environment of the Czech Republic Hanna Hubachkova signed a Memorandum on cooperation in eco-projects and sharing of environmental information that will help attract private investment.