More and more hydrogen projects are being announced in the world, as H2 can be pumped through pipes as gas, or transported by tankers as liquefied natural gas (LNG).

Although many governments are resuming support for fossil fuels to meet the need for cheap fuels, increasing investment in hydrogen has been one of the main solutions proposed by the EU following Russia's full-scale invasion of Ukraine.

Hydrogen is a good carrier or store of energy, and can also allow renewable sources such as wind and solar energy to make an even greater contribution by acting as a battery. Hydrogen is also attractive because it can be produced using various forms of energy and fuel, be it water, natural gas or synthesis gas.

According to EU President Ursula von der Leyen, the transition to RES and hydrogen, combined with greater energy efficiency, will allow Europe to become truly independent and master the energy system.

By mid-2021, the world's electrolytic capacity was about 300 MW, doubling in the last five years. However, according to the consultants of the international certification and classification society DNV, by 2030 hydrogen will still be only 0.5% of the world's energy balance, and by the middle of the century the figure will increase to 5%.

"This hydrogen production is not enough to achieve the goals of reducing greenhouse gas emissions set by the Paris Agreement, which, according to DNV, should reach 15% by 2050," - according to the statement.

Most countries around the world release hydrogen as one of the key elements in reducing greenhouse gas emissions from energy consumption. An analysis by the British government has shown that by 2050, about 20-35% of the country's energy consumption will potentially be based on hydrogen.

Oil giants Shell and BP have recently announced hydrogen deals, teaming up with hydrogen experts and increasing investment in clean energy, with automakers such as Renault and companies such as WalMart and Go-Ahead receiving hydrogen vehicles.

In 2020, world production of all forms of hydrogen was about 70 million tons per year due to direct production processes, with 98% produced from fossil fuels, mainly natural gas, and only about 2% due to low-carbon or no-carbon processes.

The EU's hydrogen strategy for 2020 states that renewable hydrogen is the most compatible option with its climate neutrality and zero pollution target in the long run.

We will remind, Norwegian scientists have launched the world's first gas turbine on pure hydrogen. 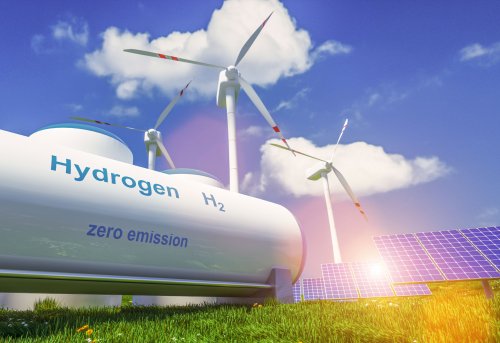