Home › News › A heat wave hit a tourist glacier in the Alps. Video 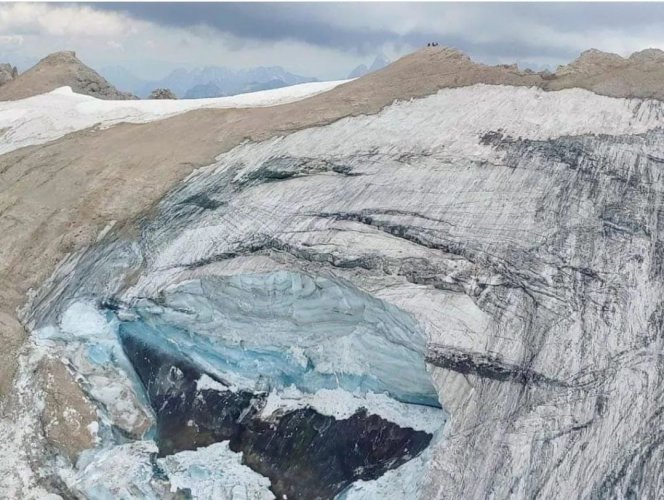 A heat wave hit a tourist glacier in the Alps. Video

In the Italian Alps, a part of a mountain glacier collapsed amid record temperatures of a heat wave, as a result of which at least 6 people died and 8 were injured.

On the eve of the collapse, the temperature at Marmolada on July 2 reached 10 degrees, it is reported by Reuters.

The avalanche hit Marmolada, which is more than 3,300 meters high and is the highest mountain in the Dolomites, a mountain range in the eastern Italian Alps spanning the Trento and Veneto regions.

An ice collapse occurred on a tourist route. Helicopters and dogs were used to search for survivors.

The non-profit organization Alpine-Adriatic Meteorological Society explained on Twitter that the glacier was destabilized at its base due to the presence of large amounts of meltwater after several weeks of unusually high and above-average temperatures. Water lubrication in the base (or interlayers) and increased pressure in water-filled cracks are likely to be the main causes of this disaster.

Incredible footage from a helicopter of the mountain rescue of the basal detachment in Marmolada.

Water lubrication at the base and increased pressure in water-field crevasses are probably the main causes for this catastrophic event pic.twitter. com/2OXRExkdjy

Rising average temperatures have caused the Marmolada Glacier, like many others around the world, to steadily shrink over the past decades.

We will remind Europe is covered by abnormal heat, which caused large-scale fires and the evacuation of people.